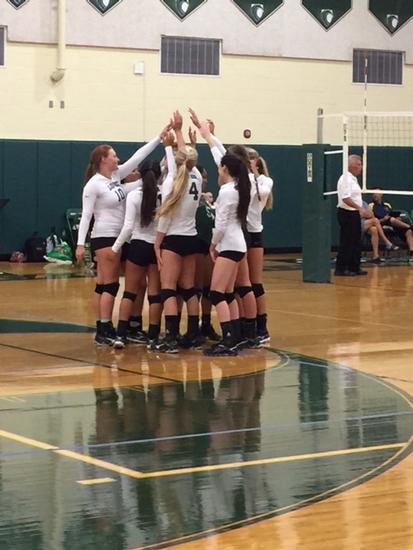 Girls Volleyball (18-6) took to the road for their final regular season road test of 2015 on Monday evening as the Green Wave would come from behind after falling in the first set but couldn't put the match away in the end as Lopez fell to the Matanzas Pirates in five games 3-2 (25-27, 25-14, 25-20, 27-25, 11-15).  After coming from behind and taking a two sets to one lead in the fourth game the Green Wave had match point twice but couldn't capitalize to close out the win as the Pirates showed great fight coming back and eventually winning in the fifth frame.  Senior captain Bailey Gillespy had a game high 14 kills  to go along with four aces and 25 digs for Lopez, while sophomore outside hitter Talyn Allard finished with seven kills and a pair of aces and blocks.  Sophomore libero Mikayla Prado finished with 39 digs in the match while her sister Mia Prado would dish out 28 assists.  The Green Wave now will close out the regular season at home on Thursday evening as they host the Pierson Taylor Wildcats at 5:00 & 6:00pm before setting their sights on the post season.  Lopez will enter the District 6-4A Tournament next Monday evening as the number four seed and will take on the number five seed Masters Academy Eagles at 7:00pm at Lake Highland Prep High School.

YOUR GAME HAS CHANGED!